It wasn’t long ago that many (although not everyone) watched with bated breath as a large rodent emerged from his burrow to prognosticate the weather. They say that if Punxsutawney Phil encounters his shadow, we’ll have six more weeks of winter, but if he doesn’t, then spring is just around the corner.

I don’t particularly prescribe to this form of meteorology. I prefer a little more science in my science, but Phil gets points for the cute factor. Now, just because I have a science degree and look for facts and data doesn’t mean that I’m cold and calculating. On the contrary, I have a religious side as well, and it helps me understand relationships, especially with people. The two traits work together, and I am not alone in this view. 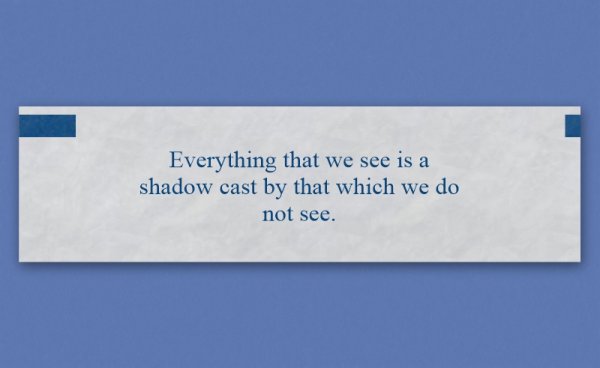 Today’s fortune is a quote by Dr. Martin Luther King Jr. from The Measure of A Man. Although he’s most renowned for his leadership in the Civil Rights movement, Dr. King was of the mindset that for humanity to succeed, we needed both science and religion.

In 1963, he published a series of sermons in a compilation titled Strength to Love. From the volume’s first sermon, “A Tough Mind and a Tender Heart,” Dr. King discussed the Gospel According to Matthew and how Jesus told his followers to be “wise as serpents, and harmless as doves.”

Science investigates, religion interprets. Science gives man knowledge which is power; religion gives man wisdom which is control. Science deals mainly with facts; religion deals with values. The two are not rivals. They are complementary. Science keeps religion from sinking into the valley of crippling irrationalism and paralyzing obscurantism. Religion prevents science from falling into the marsh of obsolete materialism and moral nihilism.Dr. Martin Luther King Jr., Strength to Love

The gopher and his shadow might not be the best way to predict the weather, but they are a good reminder of that balance between science and religion. Everything we see—ourselves, the planet, our technology, our thoughts—are shadows cast by something bigger. The unseen thing in Dr. King’s quote is the power of God.

Humankind has an intense thirst for knowledge. The main thing separating people from animals is the question, “why?” Animals go about their day eating, mating, and trying not to die. People act similarly, but we also reason and question because we seek purpose in life. Maybe it’s because of some genetic combination that stimulates this behavior, or perhaps it’s a consequence of Eve eating from the tree of wisdom. We question everything from ourselves to the cosmos, and that’s what makes humans unique. We have great minds, but we need to temper them with a great heart as well.

How many times have we seen a shadow move across the ground that wasn’t ours and looked up to see what caused it? Maybe it’s a plane or a fluffy white cloud, but what happens when we don’t find the source? The unknown can be frightening, but we can use science to reason and quell our fears.

Our scientific drive gave us warm homes, clean water, and the ability to communicate across the globe. We have traveled to the moon and back and changed the surface of our planet. It also gave us plastic six-pack holders, DDT, and weapons of mass destruction. Religion reminds us that just because we can do something, doesn’t mean we should.

Religion also gives us solace while we wait for science to catch up. Our faith enables us to comfort those battling cancer and other hardships that we have yet to solve. There are some things that we may never be able to explain, but faith helps us along. How did life begin? Why does time seem to flow only in one direction?

Here’s another one; what is love? Can we break it down into a scientific formula? Is it merely a neural impulse in the brain? Love has no quantifiable mass or energy output. We can’t see it, but we search for it. We can’t touch it, but we feel it.

What would humanity do if we could find those answers? Maybe we could control love or create a pill, so we never hate anymore. Unfortunately, we can’t, because just like gravity, love is a force beyond our control. It’s a fundamental property given to us by God. I can’t prove or disprove that scientifically, but because of my faith, I can accept the feeling and share it with others.

We may never find the answers to all our questions. Perhaps we aren’t meant to find them. Maybe our minds and hearts can only hold so much, but as long as they work in unison, we can find a balance in the world—heavenly homeostasis.

The next time you spy your shadow, know that there is more to it than your body blocking a light source. There is more out there than we can see and understand, and with both facts and faith, we can find answers and comfort.