The Ruby Cell – Work In Progress 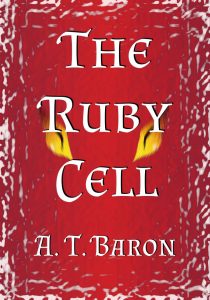 Blade would rather travel the world and experience the heroic adventures of books than help his father with the family business. The young blacksmith gets his chance when he must deal with the sudden loss of his family and venture out on a quest to stop a demon.

Just prior to watching his younger sister and last living family member die, Blade receives a message from a sorcerer. She has information on a scourge caused by the demon, and Blade takes up the call to avenge his family. Aided by the Achilles twins, that have the ability only to feel the other’s pain, and their friend Cassandra, Blade must retrieve a ruby that contains the demon, and imprison it using his knowledge of the forge. Little do they know that they are racing against a powerful tsar, who seeks to gain possession of the ruby, to help him rule his realm.

Filled with demons, sorcery, and powerful royals, The Ruby Cell follows Blade on travels more perilous than he could ever expect, and his task to be the blacksmith that would make his father proud.

Stay up to date with details on the book and its release, by signing up for my newsletter.