Fortune Cookie Friday: Without Music Life Would B Flat 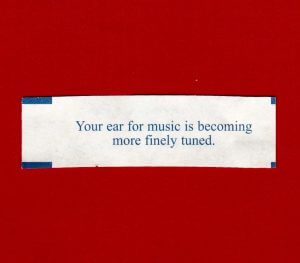 I love listening to music. I play my favorite toe-tapping tunes while cooking in the kitchen. I listen to inspirational pieces while drawing in my sketchbook. I especially love driving around town with the volume up on my stereo, singing along with an upbeat song. Music is a powerful thing, but what is it and why do we like it?

Music is the flowing composition of melody, harmony, and rhythm. Italian composer Ferruccio Busoni, said, “Music is sonorous air.” This deep ringing sound comes in many forms and complexities, from Folk to Dubstep, from Lowel Mason’s “Mary Had a Little Lamb” to Franz Liszt’s “La Campanella.” The spectrum of music has something for everyone. Of course, music didn’t begin this advanced.

Music has been around a long time and has been a feature of every known human society. Music may have been around since the very beginning time. Perhaps nebulae have been serenading us for millions of years, and we just didn’t hear it.

NASA created special instruments that could record the electromagnetic vibrations from the planets in our solar system and transferred them into sounds that our ears could hear.

If we could perceive music from these cosmic vibrations we would hear meditative sounds from Jupiter, lightsaber pulsating sounds from the sun, and, of course, the eerie sounds of wind from Uranus.

On our little planet, scientists are still trying to determine which came first, music or language. Some speculate that music predated language. It is possible that we, as primates, could have belted out a tune similar to Howler monkeys communicating to each other. A soft musical croon could indicate our romantic intentions, while a staccato cry could elicit a fight.

Music can easily be a form of communication. You can feel the emotional intent even if you can’t understand the lyrics. Animals use songs to claim territory, military generals used drums and horns to signal troop maneuvers, Aborigines use it to convey a story, and the Spice Girls use it to tell you what they really, really want.

Music also has the ability to control our emotions and open our minds. For thousands of years, primitive tribes and religious rituals have used music to reach enlightenment. Music was even used as a form a therapy.

There are written accounts of the Greek philosopher Pythagoras prescribing various musical forms to cure physical and psychological ailments. Even the Bible has an example of music therapy. In 1 Samuel 16:14-23, before David became a great warrior and King, he had a full-time gig easing King Saul’s torment by playing his lyre.

Current scientific research shows that sad music can be consoling and soothing. When some people listen to Lea Michele’s “If You Say So” for example, the mournful tune causes their bodies to secrete the hormone prolactin. Prolactin produces feelings of tranquility and calmness and emits a consoling and soothing effect.

One study found a link between musical preferences and three broad thinking styles, or “brain types.” Empathizers (Type E) are people that have a strong interest in other people’s thoughts or emotions. Type E’s preferred mellow music with emotional depth, like “Hello” by Adele. 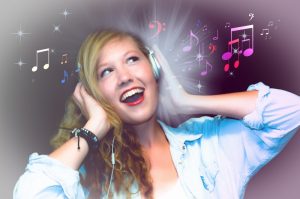 Systemizers (Type S), on the other hand, are more interested in patterns, and the rules that govern the world. Type S’s would prefer more intense music like hard rock or music that is intellectually deep and complex. You might find them jammin’ to some Motley Crew’s “Kickstart My Heart” or chillin’ on Alexandre Scriabin’s “3 Etudes op.65 no.3.”

Then, there are the “Balanced” (Type B) brain types that are an equal amount of both types E and S. Type B’s enjoy a broader range of music than the other types. They probably have multiple playlists that span every genre of music.

There is some neurobiological evidence that suggests that the music preference may be linked to the size of specific regions of the brain. Type E’s appear to have a larger hypothalamic region that regulates the secretion of prolactin. Type S’s appear to have a larger area of gray matter in certain areas of the brain that relate to cognitive control, monitoring, and error detection.

We can use music for communication, therapy, or to give our bodies a beat for dancing. Music brakes the language barriers, moves our souls, and gives our lives beauty. Friedrich Nietzsche said, “Without music, life would be a mistake.” I believe that music is to the ears like a rainbow is to the eyes. It is the beauty for the ears to behold.