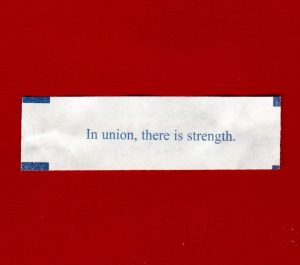 What do you think of when you hear the word “union”? A union is the state of being united or joined. So, you might think of The United States. The U.S.A. hasn’t been very united recently. I hate having to talk about politics, especially in recent days. You never know how people will react. You may find yourself having to either agree or sit quietly and roll your eyes. Heaven for bid you have an opposing view than someone else. The moment the subject of politics comes up, people seem to turn into Mr. Hyde.

For example, I was sitting next to this sweet, little, elder woman at the doctor’s office. She told me all about her Yorkshire terrier, and adopting him from the shelter. The TV in the waiting room began a news story about our country’s recent election, and she quickly glanced up at it. I truly thought this kind woman was going to break a blood vessel in her temple.

Seriously, her face turned beet red and her speech about how her cute, furry, four-legged baby transformed into expletives muttered under her breath. Her knuckles whitened as she clutched her cane with ferocity. I wondered if this frail woman would use it as a blunt instrument of death.

It wasn’t long before I imagined a wide-eyed news reporter making an announcement on TV. “Violence erupts at doctor’s office. Two dead and six wounded by rampaging politico-psycho granny. News at eleven.”

Today’s fortune comes from Aesop’s’ fable, “The Bundle of Sticks.” A dying man summoned his sons, and asked each of them to break a bundle of sticks. They could not. He then asked them to separate the bundle and break a single stick. They could. “’You see my meaning,’ said their father.”

I don’t know what kind of disagreements this old man’s sons were having, but he knew that they needed to get along. There is no doubting that there is a difference of opinion throughout our country, but I think we have forgotten that it is our country. We all live here together, and we need to get along.

Living together can be difficult. There are plenty of issues that arise when you live with someone, where do you live, what groceries do you buy, and who cleans the bathroom. When you get married, you form a union. Sometimes people refer to marriage as “tying the knot”; you are bound together. That bond is only as strong as your greatest weakness.

What makes a marriage weak? Divisiveness. We become divisive when we have a difference of opinion and we think our way is the only way. You can’t agree on everything, so you will have to agree to disagree. If you want to have a long lasting relationship with someone, you need to put aside your differences and love them even though they have faults. You have faults too.

Since knots can come undone, perhaps a marriage should be more like weaving a rope. Your lives intertwine like strands of a rope. Think about all of the fibers and strands that form a rope. Now, think about all of the characteristics and events that bring a couple together. Those bonds make a strong rope, and a strong marriage. The bond of a rope is stronger than a single knot. Even putting a knot in a rope will make the rope weak under tension. 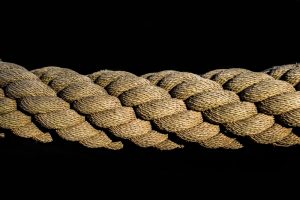 When you make rope, all the fibers are laid out straight and then twisted into strands. The strands are further twisted into rope. Their union makes them stronger. When you pull the rope taught, all of the fibers have the same stress. They all take the load equally. When you tie a knot in the rope, the fibers on the inside of a curve will not have the same tension and the strain will be uneven.

Another example of a strong union is DNA. DNA is a double helix formed by base pairs attached to a sugar-phosphate backbone. The individual hydrogen bonds that form between four chemical bases: adenine (A), guanine (G), cytosine (C), and thymine (T) are relatively weak, but there are many of them. Together, they make the DNA stronger. They work together. Their union makes them stronger, even though they are very different chemicals.

The DNA and rope remind me of our nation’s motto, “E Pluribus Unum,” Latin for “out of many, one.” It represents our strength, even with our differences. Just like those chemical base pairs, and those thin fibers, we need to work together. We need to get along. Individually we are weak, but together we are strong. We need to put aside our differences and form a bond, a union. For, in this union, there is strength.