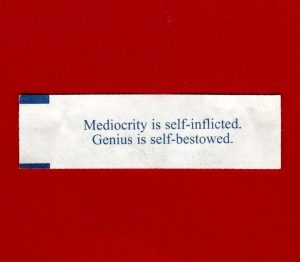 Why would anyone want to be mediocre? Do you seriously want to be ordinary or average? Do you prefer being neither good nor bad, but adequate? I highly doubt you do, but I bet you feel like you are. Actually, you’re born that way. You come into the world neither good nor bad. You are a clean slate. You have all of the potential to be whatever you want. I won’t tell you that you’re special. Society pushes the narrative that everybody is a winner; everybody is special—even just for showing up. That makes special mediocre.

Of course, mediocre can be a nice safe place. You can’t get hurt with average or ordinary, because it’s easy to get there. Life can be hard. I’m sure sometimes you feel as fragile as a light bulb. You’re afraid things might get too difficult and you might stumble, fall, and shatter. Don’t worry, no matter how mediocre you think you are, you can change.

Walter Russell (May 19, 1871 – May 19, 1963) quoted today’s fortune. He was an artist, philosopher, builder, musician, and writer. Some called him the Renaissance man for the twentieth century. He was born just like you—naked and needy. As he grew, he focused on enlightenment and education. He worked hard to understand great concepts and ideas. He had failures too, but he didn’t let them hold him back. He ended up having many “light bulb” ideas

Walter believed that everyone has a genius within themselves. Don’t worry if this idea difficult to believe, or seems a bit “out there”. Nikola Tesla had advised Walter to lock his work away in a safe for 1000 years, because Tesla believed humankind was not yet mature enough for it. It may not be 1000 years, but I think we’re ready to tackle being a genius. How do you develop the genius inside of you and let it out like a genie? The best way is to focus and work hard, just like Walter.

“But I hate work,” you might say. “It takes work to work.” Well, then you’ll have to settle for mediocre. You brought it upon yourself. You can simply do nothing, and never amount to anything great, but it is hard work and focus that makes the plain profound, the bland brilliant, and the average astounding. Imagine if Abraham Lincoln, Martin Luther King, or Thomas Edison chose not to work, not to try. What kind of world would we be living in? I assure you it would be a very dark world indeed.

Speaking of Edison, as a boy, he had a voracious appetite for knowledge. As he got older, he preferred learning by independent self-instruction. With a little guidance from his parents, by the time he was 12 years old, Edison read Gibbon’s Rise and Fall of the Roman Empire, Sears’ History of the World, and Burton’s Anatomy of Melancholy. He also devoured The World Dictionary of Science and bunches of books on Practical Chemistry.

Edison could never get enough information and worked hard to focus on learning new things. Even after he began losing his hearing in his left ear, he refused to fix it surgically, because he was afraid he “would have difficulty re-learning how to channel his thinking in an ever more noisy world.” Now, that is some serious focus! He went on to invent the phonograph, the incandescent light bulb and one of the earliest motion picture cameras.

Again, Edison was born just like the rest of us, but he didn’t just sit there and watch the world go by, his drive made him a genius. A light bulb wasn’t made just to sit in a lamp socket; it was created to light the way, to shine. You are that light bulb. Will you work at bestowing genius upon yourself? Will you work to be that beacon of brilliance?