I recently finished the Divergence series by Veronica Roth, and thought I would write a review. To be honest, I read the books after I saw the movie Divergent (2014). My daughter read the first book and suggested I read them, and I thank her for that. This review will be on the first book of the series and I will do my best not to include any comparisons to the movie. SPOILER ALERT, this review may give away important story points. 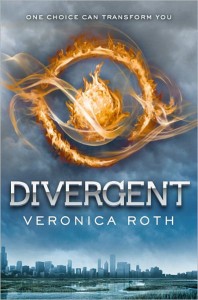 Divergent (2011) is about the dystopian world of Beatrice Prior, where society is divided into five factions depending on their virtues in life. When the teens in this world turn sixteen, they must choose one of these factions to spend the rest of their life in. Beatrice has to make the decision of whether to stay with her family or be who she really is.

I enjoyed the author’s writing, even though it was in first person. I prefer reading stories written in third person, even though many, if not most, YA novels these days are not written that way. Roth made that transition comfortable for me. Her protagonist’s life was intriguing and I felt like I could connect with Beatrice, even though I did not live the selfless life of Abnegation.

After Beatrice discovers that she is Divergent, I was even more drawn to the main character. I could see how someone, her age now, could feel a desire to know more about themselves, and how they are different from others. In fact, the idea of leaving a home of strict rules to venture out into the unknown and take risks is the very essence of growing up and becoming an adult. Roth took that premise and created an archetype around it.

Roth takes the choices our youth make and reinvented them into this world. Beatrice wants to be a new person and changes her name to Tris. She meets new friends in her chosen faction, Dauntless, and finds romance as well. But she also finds the truth, that being Divergent, will take more bravery than new this faction can teach her.

I was very entertained by the first book of the series, and was eager to get to the second, but I had to sit patiently while my daughter finished it. We decided to read them marathon style and it was difficult not to glean what I was in store for by her gasps and tears. I hope to have a review of Insurgent (2012) soon.