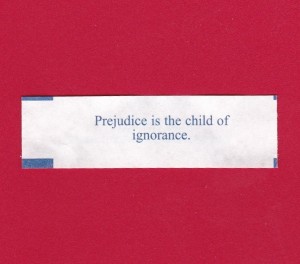 I have been so busy lately, that I actually forgot it was the end of the week, resulting in me almost forgetting to post my next addition of FCF. With the stories in the news these days, I find this one quite apropos. I don’t want to start a huge race relations discussion, or get political, so I will just let you digest this one for a bit. Speaking of digesting, the cookies that contain these little papers would taste good if they had some cinnamon extract added, but I digress.

When I think about prejudice, I always remember what some astute teacher told me, “We aren’t born prejudice, we learn to become it.” As children, we see everything as new, because most things we see are just that. Over time, we develop opinions or preferences, because of how they make us feel and/or because of the influences of people close to us.

Do you remember enjoying eating strained peas as a toddler, probably not, but because your parent, someone you love and trust, smiled as they spooned green slime into your mouth, you accepted it willingly. After that, you were able to make your own opinion on the taste, which probably resulted in green goo oozing out of your mouth, that your parent dexterously scooped up and fed you a second time.

People are pack animals, and because of that, we rely on the responses of those around us. If your parents or family members are opinionated about a subject, you are likely to have a similar opinion, until you surround yourself with another pack that feels differently. Of course, you will also find that you choose certain packs because they have the same opinion.

Prejudice is different from opinion or preference, though. Prejudice is prejudgment, or forming an opinion before becoming aware of the relevant facts of a case, that old “judging a book by its cover” idea. We try to make a judgement on something by using our experiences alone, and that can be foolish. I would love to say that I am not prejudice, but I am sure, that sometime in the past, I made a judgement on someone or something that was inaccurate; I am human, and we all screw up. Now, I try to look at everyone as a new character in a book; you know nothing about them, until the author reveals either a description, or even better, that character’s reaction in the scene.

We are all characters in this big book of life, and anyone could be that hero in disguise.