There are times in our lives when some things may seem out of reach—more often for me since I’m so short. It’s not uncommon to come up with grand ideas for ourselves. We may be saving towards a large purchase, starting a major in college, or about to take a long hike. Our plans can seem humongous when we first have them, but our accomplishment is possible if we know how to tackle them. 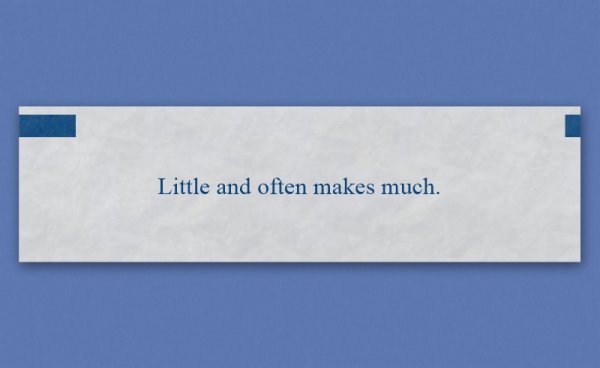 Today’s fortune reminded me of Aesop’s fable, “The Crow & the Pitcher.” The original translation taught us the moral, “In a pinch, good use of our wits may help us out,” but I was thinking about the Eliot/Jacobs version.

Aesop's Fables - The Crow and the Pitcher - Eliot/Jacobs Version

A Crow, half-dead with thirst, came upon a Pitcher which had once been full of water; but when the Crow put its beak into the mouth of the Pitcher he found that only very little water was left in it and that he could not reach far enough down to get at it.

At last, at last, he saw the water mount up near him, and after casting in a few more pebbles he was able to quench his thirst and save his life.

“Little by little does the trick.”

Whenever we find ourselves beginning a monumental task, it’s best to take it one step at a time. By breaking things down into manageable parts, we can work our way through to completion.

When my children were younger, they took piano lessons. They were both very good at learning music, but they were despondent whenever they had to learn a new piece, especially if it was long.

“This looks too hard for me to learn,” my son said once. If he heard the piece of music first, he might have been able to play it by ear, but his teacher knew my son needed to learn how to read the music to master the skill. 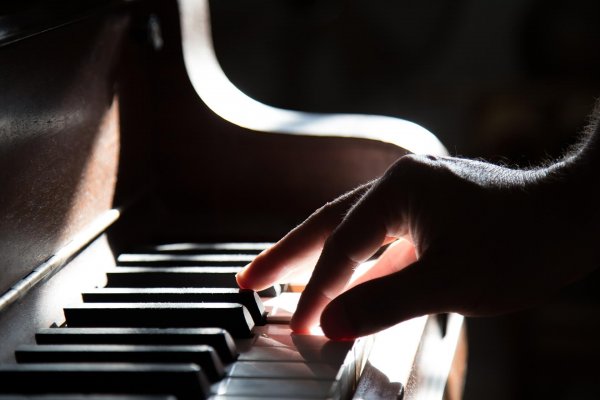 I’m sure when he first saw the new sheet music splattered with a multitude of varying notes along the staff lines, he felt a little sick. The long look on his face was a dead giveaway, but his teacher knew just what to do. He pointed to the first measure and asked my son, “How do you eat an elephant?”

My son looked at him with surprise and said, “I don’t know. How?”

“One chunk at a time,” his teacher responded with a smile. “Let’s start with the first line and see how far we get.”

Together they worked through the music one note at a time, first the right hand and then the left. It wasn’t long before my son could play with both hands at the same time. A few days of practice and he mastered the song altogether.

I recently used this same practice when hiking Bryce Canyon in Utah. The 6.63-mile trek started well until I had to tackle some inclines. The weather was dry and moderately warm, and I was feeling winded from the higher altitude.

Glancing up at the winding pathways that took me through the canyon, I reveled in the power of nature’s ability to create such beauty. Of course, it didn’t happen overnight. It took millions of years to form the geological landscape. Wind, water, and ice weathered away the rock bit by bit to form rivulets and gullies and eventually deep slot canyons and hoodoos.

The trek winded through the canyon with constant changes in elevation, and I doubted my ability to make it physically. While I trudged along the dusty trail, I thought of the story the president of Southern Utah University, Scott L. Wyatt, told at my daughter’s college induction the week before.

A friend of his ran a 100-mile marathon. When President Wyatt asked him how he could run 100 miles, his friend said that he didn’t. “Running 100 miles all at once would be impossible,” he told President Wyatt. Instead, he ran one mile, and then he ran the next mile, and so on. The runner broke down the impossible into the possible.

I made it through the canyon the same way, I set my view on a point ahead and took it one step at a time. Eventually, I made it to my destination with enough energy to take photos of all the awe-inspiring scenery. The photo shoots also gave me a chance to take a breather. Now my camera is full of canyon imagery, and my heart is full of accomplishment. 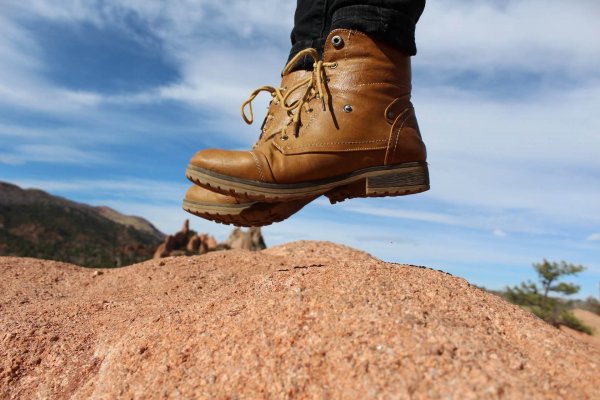 Little by little does the trick with any large project. Training for a marathon? Start by running a little each day. Saving for college? Start putting small amounts of money into a savings or investment account early on. Is the stack of pancakes you ordered bigger than the plate and enough to feed a small army? Start by sectioning it up like a pie and eat one piece at a time—better yet, share some with a friend.

The next time you find yourself overwhelmed by an insurmountable task, stop, and think like that crow. Use your wits to help you out, and little by little will do the trick.