I am a mother of two children. There are issues that parents of multiple children deal with on a regular basis that single-child parents don’t. Time spent with our kids is divided, although not always equally. When there is a broken item in the house, we need to determine which child was responsible. When there is an argument that the children can’t settle on their own, we may need to intervene.

There are the occasions when a single-child parent will have to address similar issues. Their single child may have friends over, or they could be visiting family with other children. Disputes will arise, and it is at these times that diplomacy can help. 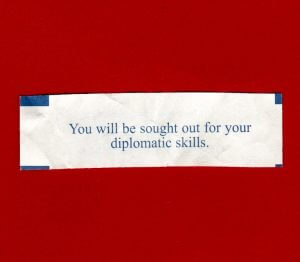 Now, I’m no Henry Kissinger, but I have used my diplomatic skills many times with my kids. They came in handy for getting to the bottom of certain situations, such as who left toys on the floor, who made a mess in the kitchen, or who is responsible for my desserts mysteriously disappearing (Parenting Sleuth Tip: Smell the child’s breath. They hardly ever think to brush their teeth).

My solution was if someone didn’t fess up, both would receive punishment. It didn’t take long for the guilty party to come forward. Although, many times I had to follow through with my threat, and they both ended up in their rooms. My kids also learned that the punishment was less severe for those that didn’t try to lie. “Mom always finds out the truth,” my kids would say. And I do.

There are many stories of diplomacy. The Judgment of Solomon was a well-known diplomatic example. The story in the Hebrew Bible tells of two women going to King Solomon claiming to be the mother of a baby. They argue back and forth until Solomon suggests cutting the baby in half so that each woman can have a part.

Yeah, I know; it’s a pretty gruesome idea, but King Solomon was wise, and his diplomacy solved the riddle of which woman was the true mother of the child.

A sword was brought to the king. One woman encouraged the division of the child, insisting that if one could not have the baby, then neither of them could. The other women relinquished her claim to the baby to save its life. The king declared the second woman the true mother, as a mother would even give up her own child if it were necessary to prevent its death.

Parents don’t have to go to this extreme to be diplomatic with their children, but the story shows that with the right knack, parents can help their children resolve their problems amicably and diplomatically.

This same premise works for adults too. Diplomacy has aided in trade agreements between countries, ended major wars, and pacified parties in hostel divorce cases—nobody wants to see the pet dog cut in half.

Diplomacy can do the trick, and it doesn’t matter if we are an outsider mediating the situation or someone with a vested interest. If we want to be more diplomatic, here are some things to consider:

Go for the Win-Win

Most of us are looking for a fair and just solution to our problems. A good diplomat aims for a win-win situation, where both parties gain something from the outcome. Diplomacy could be as simple as sharing a treat between two children or as complex as the negotiations in an international accord.

Every good diplomat takes time to listen to all sides of the argument. Sometimes we interject too much. We spend more time pushing our ideas than listening to opposing viewpoints. Stop and take a moment to listen to objections. Take time to understand what is said. Think before reacting.

Take some time to imagine what the other person is going through in their life. We may not have experienced it for ourselves, but we can consider how we would react in a similar situation.

‘You never really understand a person until you consider things from his point of view . . . until you climb into his skin and walk around in it.’“Atticus Finch” in the novel To Kill a Mockingbird by Harper Lee

A little empathy can bridge the gap in a conflict. It can even change an opposing view and possibly end the disagreements altogether.

Be Direct with Respect

You can be succinct without stepping on another’s toes. Good diplomats are respectful with how they treat others and the words they choose to use. Avoid aggressive language like, “Always…,” “Never…,” or “You have to…” Instead try indirect language, like “It looks like…” or “You might consider.”

It’s not what you say; it’s what people hear.Frank Luntz, Words that Work

Instead of telling someone they are wrong (even if they are factually incorrect), consider saying, “I have a different opinion. Here is why…” When we are respectful of others, others will be respectful of us.

If we want to be diplomatic, consider the advice from Disney’s “Ursula” from The Little Mermaid (1989), “Don’t underestimate the importance of body language.” I’m not talking about getting romantic here, but being relaxed in a diplomatic situation can make a huge difference in the outcome. Disagreements can be difficult. If we are stressed, it can show, and others will notice it.

Try to relax. Breathe deeply. Use positive body language while speaking, such as keeping an appropriate distance with others, having an open posture (face forward with uncrossed arms), and making eye contact. If the stress of the situation is too great, consider waiting until later to be diplomatic. We need a cool head to think clearly.

We all want to have it our way; it’s in our selfish nature. Unfortunately, life doesn’t always go our way. When daunted by disagreements or reeling from relationship strain, a little diplomacy can do the trick. No one is born the perfect diplomat, but over time and with a bit of practice, we can learn to be more diplomatic and less dictatorial. If we are savvy enough, we might be able to develop our skills to equal Sir David Frost’s definition of diplomacy, “the art of letting somebody else have your way.”