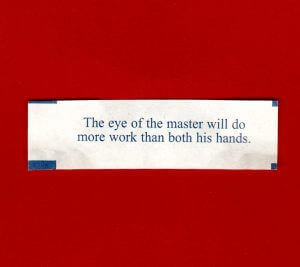 Benjamin Franklin was not just one of our Founding Fathers; he was also an inventor, scientist, printer, politician, Freemason, and diplomat. He had a wide range of knowledge and was a writer known for his wit and wisdom. Today’s fortune is some of that wisdom that Franklin bestowed.

Benjamin Franklin was a hard worker. He was a man that believed you should do your work on your own and not rely on others to do it for you. He took responsibility for himself and for the jobs he had. One may wonder why he would say, “The eye of the master will do more work than both his hands.” Apparently, Franklin didn’t approve of micromanaging.

Perhaps Benjamin Franklin was micromanaged in his older brother’s print shop, or maybe he found that by giving opportunities to his employees at The Pennsylvania Gazette newspaper he empowered them to do better. While Franklin owned the press, it became the most widely-read paper in the colonies and one of the first to turn a profit.

No one likes people micromanaging them; it is one of the most damaging habits an executive can have because it can stifle the workflow of the employees and result in poor output. It’s okay to know what is going on in a company, but it is unnecessary to have a hand in every minutia.

Micromanagement is the destroyer of momentum.Miles Anthony Smith, Why Leadership Sucks™ Volume 2: The Pain, Pitfalls, and Challenges of Servant Leadership Fundamentals

We don’t need to be the owner of a big company to fall prey to micromanaging. The micromanaging madness can easily creep into our everyday lives. We try to take on too many tasks at once. We try to control our relationships with family and friends. We feel we have to be involved in and have influence over many different activities. Unfortunately, it is often in a way that others do not approve.

It’s great if we know how to fix the plumbing, cook a four-course meal, and teach our kids algebra, but it doesn’t mean we have to do all of these at once. All we do is spread ourselves thin, get poor results, and annoy others.

Executive coach Dr. Stacy Feiner said if we do micromanage it can be for different reasons. For example, we don’t know how to manage others or certain aspects of our lives, we don’t know how to delegate to others, we don’t have enough information on how to tackle a task, or we find the people helping us aren’t good at their job. If we want to stop micromanaging, we need to know why we are doing it in the first place.

Some of us can be massive micromanagers. If you find that your one of those that has to have a hand in everything, here are a few suggestions to help manage your micromanaging madness.

Let go – We want to feel in control of our lives, but we can’t control every aspect. Learn to let go of the reigns every once in a while. Not only will letting go free us to focus our attention on more important areas, but it can also give those we manage the ability to spread their wings and take a project to new heights.

Hold others accountable – When others make mistakes, make them fix it. The people we lead need to know they have some skin in the game. If they know we are going to swoop in and take over when something goes wrong, then they won’t give their best effort. If we put the onus on them, they will perform.

Get the right help – It helps to choose experienced people when it comes to delegating tasks. The more they know, the more we can trust them to do the job right.

Open lines of communication – We should let those we delegate know that they can speak to us freely. Talking through an issue can allow them to solve it faster and we can keep abreast of the situation at the same time, without having to nag them for information.

Focus on the big picture – Performing jobs and planning events can get hectic with all of the nitty-gritty details that we have to monitor. We should focus on the result, our primary goal, to keep the details from bogging us down.

Whether we’re planning a play date, adding on an addition, or leading a company up the Fortune 500 list, curbing our micromanaging can give the job momentum and make it more rewarding. Once we stop the madness of micromanaging other people and situations, we will be able to accomplish a lot more.