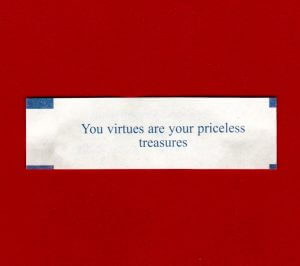 In 1940, Garry Cleveland Myers created the didactic comic “Goofus and Gallant.” It has been a monthly feature in Highlights for Children since the founding of the magazine in 1946 by Myers and his wife, Caroline. I read the magazine as a kid every time I went to see the doctor. It’s almost impossible to find a waiting room without the magazine. In fact, I wouldn’t be surprised if every pediatrician received a subscription of Highlights for Children upon earning their doctorate.

The two characters of “Goofus and Gallant.” are the archetypes of badness and goodness. Editor Kent Brown, a grandson of the founders, said, “No one is as good as Gallant, and no one is as bad as Goofus. But being more like Gallant is something to strive for.” Gallant displays virtue, something today’s fortune reminds us is essential.

Virtue is a trait or quality that is deemed to be morally right. Because of this, we value virtue as a foundation of principle and good moral being. Being virtuous is not an easy task. There is a struggle between good and evil. Our culture has depicted this struggle as angel versus devil, C. S. Lewis’ Azlan versus the White Witch, and George Lucas’ the Force (or the Light) versus the Dark Side. Unfortunately, we don’t have talking animals or a little green alien helping us make proper decisions in life.

We learn about many virtues as we grow up. Whether we learn them from our parents, religion, or gain them navigating life, our virtues define us. When Rev. Martin Luther King Jr. spoke about “content of character,” he was talking about our virtues.

So what are the virtues of life? Most people know good from evil. “Thou shall not kill” is one of the Ten Commandments, but we don’t need to be religious to know that we should not kill people. Virtues cover more of the gray areas that people may overlook.

There are seven traditional virtues in Christianity:

Faith
– belief in the right things, fidelity to one’s promises.
Hope
– desire accompanied by expectation of or belief in fulfillment.
Charity
– a kindly and lenient attitude toward people; generosity and helpfulness especially toward the needy or suffering.
Courage
– mental or moral strength to venture, persevere, and withstand danger, fear, or difficulty.
Justice
– the quality of being just, impartial, or fair.
Prudence
– the ability to govern and discipline oneself by the use of reason.
Temperance
– moderation in action, thought, or feeling; abstaining from excess.

The first three are Spiritual Virtues, a variation on St. Paul’s of Love, Hope, and Faith. The last four are Natural Virtues defined by Greek philosophers. These virtues oppose the seven deadly sins, or vises, pride, envy, gluttony, lust, anger, greed, and sloth.

There are other versions of virtues such as The Seven Principles of Bushido, and 52 Virtues (from The Virtues Project Educator’s Guide: Simple Ways to Create a Culture of Character) but an important aspect of virtue is not necessarily altruism or empathy. There are examples of those throughout nature. Some bacteria cooperate in an altruistic manner, and primates and dogs can feel shame and empathy. Human beings should rise above those behaviors. Virtue is not just being kind, or doing good works; it is about growth.

Courage is not simply one of the virtues, but the form of every virtue at the testing point.C. S. Lewis

We need to practice the virtues taught to us. It’s not easy being faithful, prudent, or courageous, but practice can help. I like to compare virtues to wearing a retainer, that annoying plastic and wire contraption that orthodontists recommend after the removal of braces.

We are supposed to wear the retainers whenever we aren’t eating and then, after a period, while we sleep. Retainers are inconvenient and uncomfortable, but they keep our teeth in alignment. If we don’t wear them, or worse lose them, our teeth will become crooked.

Those who have virtue always in their mouths, and neglect it in practice, are like a harp, which emits a sound pleasing to others, while itself is insensible of the music.Diogenes