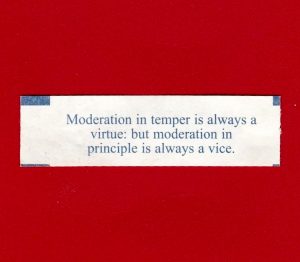 I have a confession to make. I love to watch animals and people. I love to observe them in their daily activities and see how they react to various events or stimuli. Lately, my interest has been in watching the subjects grapple with a given set of principles versus their desires. I am astonished at how level-headed animals act compared to some humans when faced with this choice.

I throw out peanuts in my backyard for the squirrels to eat. Squirrels are prey animals, and they have to be quick and prudent with their time out in the open. Because the peanuts are an easy food source, many squirrels come from all around the neighborhood to get them. But what if the food wasn’t so easy to get any more? What if the tasty nuts resisted? Would the squirrels risk the extra time and energy to win that nut? 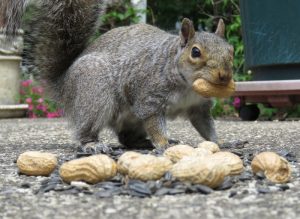 One lazy summer day, I decided to run a completely unscientific test on the squirrels. I wanted to see how they would react to peanuts tied to strings so they couldn’t run off with them and bury them. I was holding the other end of the string, thus began an afternoon of Critter Fishin’. You can watch a video of it here.

Most squirrels approached the peanuts like normal, carefully assessing the area for predators. They chose an acceptable nut using whatever squirrelly standards they had. They would eat the first two or three nuts from a safe perch and then proceed to bury any remaining nuts available. When they chose the anchored nuts, they were “perplexed” at the resistive force. I apologize for any anthropomorphic description, but I did mention this was unscientific.

The squirrels studied the nuts warily and many times attempted a second or third tug. Most gave up with that nut and went on to choose another easier target. One would think that the experiment was for naught. On the contrary, I laughed my butt off and was able to record the before mentioned video. The simple things make life worth living.

It seemed that no matter how tempting the nuts were, the squirrels stuck to a basic principle: get the food and get to safety. They only lingered when they didn’t sense the threat of predators. This principle keeps them alive. I should note that one squirrel, endearingly named Dookie, took a large amount of time devising a way to get the nut off the string, and succeeded. She’s a regular to my yard and possibly felt safe enough to do so, but I am only speculating.

When it comes to principles, I have noticed that humans compromise more than other animals. Being at the top of the food chain is no excuse. As a human, I am just as guilty as others are for letting my feelings or desires get in the way of what is right. We put our wants above our needs and those of others, which leads us down the path of selfishness and greed.

Luckily, humans are mostly good people and stick to a common set of principles. For example, respect life and others, live within our means, be on time, don’t lie, and don’t steal. Society is a much better place when we follow these principles. Many people will even selflessly help others, even if in a small capacity because they stick to a strong set of principles. 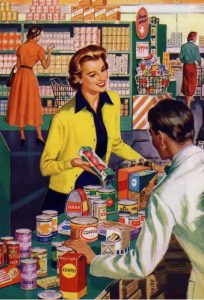 Today’s fortune was written by Thomas Paine and reminds me of an incident that occurred in a grocery store. I witnessed a child having an emotional breakdown because the parent refused to buy something that the child wanted. The seemingly innocent question, “Can we get this?” transformed the cereal aisle into a scene from a dramatic soap opera—minus the coma patient waking up.

The parent was a frazzled-looking mother. Her cart held a baby carrier that contained her sleeping infant. She maneuvered the cart with one hand while towing her toddler with the other. They walked down the aisle, and she picked out a plain canister of oatmeal from the bottom shelf.

As the mother scanned her short list of grocery items, the toddler pulled on her arm and pointed to one of many multicolored boxes of sugary cereal. The smiling cartoon character enticed the young child, and he grabbed the box. “Can we get this?”

The mother removed the box from the child’s grip and said, “No. It’s not on the list and isn’t good for you.”

It’s my opinion that she should have stopped with, “No.” She didn’t need to explain herself to the child, but she showed restraint in standing with her set of principles. These appeared to be they could only buy a select few things, and she wanted to provide a healthy diet for her family. Unfortunately, the child didn’t see it that way.

Starting with a barrage of, “But I want it,” he increased his volume and reached for the box again. The mother pulled him away, and he began to scream. Not wanting to accept failure, his whole body went limp, and he fell to the floor. He proclaimed his desires for the crispy cocoa treat at an ear-piercing level.

The mother rolled her eyes and looked around in dismay. Her eyes met mine, and I nodded with a polite smile as if to say, “I know what you’re going through.” She took a deep breath, turned back towards her now flailing child, picked him up, and placed him in the cart. As she pushed the cart passed me, I said, “Don’t worry. This too shall pass.” She smiled and continued around the end of the aisle with her crying toddler and still sleeping baby.

The child’s temper tantrum was an attempt of desire over needs. When tried against the mother’s strong principles, the tantrum was found lacking. As children, we learn certain principles from our parents to keep us healthy and safe. We continue to learn similar principles and rules in school and in life.

When a principle or rule conflicts with our desires, we need to moderate our feelings. Parents tell their children to clean their room so everything is in its place and it looks tidy. It also prevents mysterious sources of pungent odors. Children can either clean their rooms or not. It doesn’t help them to have an emotional meltdown. All this does is cause anxiety and anger. 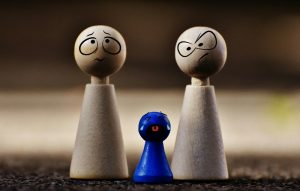 Moderating our temper promotes stability and balance. We can think clearly and act accordingly. If we moderate our principles—compromise them—we steer away from what is right and true. We end up confused, corrupt, and become an easy target for deception.

As a society, we can be more like the mother and less like the child. Can we moderate our tempers and stay true to our principles? Or will we risk it all on our desires and become an easy prey picked off by the societal predators lurking in the brush?