I was in Drama Club in high school and college. It gave me the chance to learn new skills and pretend to be someone else. Sometimes I was helping backstage with the crew and sometimes I was a lead actor. Prior to every performance, we had a read-through with the cast, design meetings for the set and many, many practices. Our dress rehearsals helped us work out any last minute kinks and sometimes we had more than one. Hey, pobody’s nerfect. 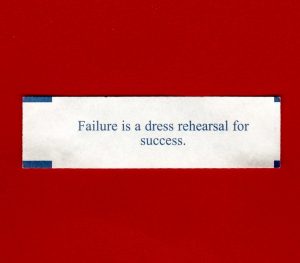 Success works the same way. We strive for that flawless performance, but we don’t reach success without a few fumbles. Sometimes we miss our marks or props are missing. We may forget a line or have a wardrobe malfunction. Nonetheless, the show must go on. For many, the show becomes a hit.

There will be times when we feel like a flop. That is when we should consider the many people that experienced failure—sometimes often—and end up getting top billing. These actors in life and some were actual actors, didn’t let their failures stop them from reaching their success.

People Who Failed at Their First Attempt

The inventor’s bright ideas took many trials and errors, but Edison made it work. As a child, he dealt with scarlet fever and many ear infections that left him with hearing difficulties in both ears. He was a hyperactive child and prone to distraction which led to his mother pulling him out of school. He was deemed difficult by teachers and was told he was, “too stupid to learn anything.”

Luckily, a little homeschooling and his voracious appetite for knowledge helped him develop the skills he needed for life. Later life brought some dark times when he was fired from his first two jobs. He did come up with 1,093 patents for different inventions, although some inventions didn’t pan out.

He tried building with cement, including furniture, but it was too expensive at the time. He worked on a device, the Kinetophone, to add sound to moving pictures, but the creation never really took off and he later abandoned the idea of motion pictures with sound. Even his famous light bulb took 1,000 unsuccessful attempts until he got it right.

From seeking out ancient relics to fighting futuristic bad guys, Ford was in some difficult situations in his movies. He also hit some setbacks in life. As a child, he had to deal with bullies. He made it through high school and he finally got his chance with acting when he took a drama class in college. “I was terrified to get up in front of people, but I really enjoyed the storytelling part,” he said about his experience.

He left college before completing his degree and headed to Hollywood. It wasn’t any easier. He had his debut as a bit player in Dead Heat on a Merry-Go-Round. Studio executives weren’t impressed. One told him, “You’ll never make it in this business.”

Frustrated Ford became a carpenter to earn some extra cash and attempted to make it big in film. It took a while, but the force must have been with him because he landed the role of Han Solo in Star Wars. At about the same time, he snagged the role of Indiana Jones. He’s earned multiple acting awards and is probably the only serious actor to get away with the line, “Laugh it up fuzzball.”

Similar to her magical character Harry Potter, Rowling dealt with death and turmoil in her life. She knew at a young age she wanted to be a writer, but her fame didn’t come until later in life after many hard experiences.

Her mother fought for years with multiple sclerosis and it took a toll on the family. Rowling’s mother passed away just after she started writing The Sorcerer’s Stone. The death inspired Rowling to write the loss of Harry Potter’s parents, but just like a boggart, tribulations come in many forms.

Rowling moved to Portugal and met her husband, but their marriage was not meant to last. Divorced, she moved back to the UK with her baby daughter. There she struggled in a tiny apartment, jobless and penniless, writing all the while. She dealt with bouts of depression but kept on submitting her final work to publishers. Without a single drop of Felix Felicis (Liquid Luck), she persisted and struck a deal with Bloomsbury, a publishing house in London, and the rest is magical history.

This famous baseball player had some major league problems growing up. A bit of a trouble maker at the age of 7, his parents had a hard time dealing with him using tobacco and alcohol, not to mention taunting local police. At their wit’s end, they sent him to a Catholic orphanage and reformatory.

It might seem like this left-handed pitcher didn’t fail, but if you look at his batting record, you will see a different story. He held the home run record during his career, lasting 34 years. When he broke the record in 1923, he also broke the record for the highest batting average.

There was another record that Babe Ruth broke that year that might be of interest. In 1923, he struck out more times than any other major league player. He held the record for strikeouts, 1330 in all, for decades. He’s quoted saying, “Every strike brings me closer to the next home run.”

It may be a small world, but Walt Disney had some large failures before he started making billions from his brand. In his early twenties, Walt was bankrupt after the failure of a cartoon series in Kansas City. His newspaper editor said, “he lacked imagination and had no good ideas.” He traveled out to California with hopes of acting, but that didn’t work out.

He started up a number of businesses that failed, but Walt Disney kept going. He created movies, theme parks, and lovable characters. Many of those characters gave advice that Walt learned along the way. Advice like:

Even after Walt Disney’s final act, his work lives on. He now gets to watch it from the best seat in the house.

This is just a sampling of well-known people that persevered through failure. They played their part on the grand stage through bad reviews and empty theaters. In the end, that perseverance brought the house down. We can do the same by not letting our failure prevent us from shining like a star.