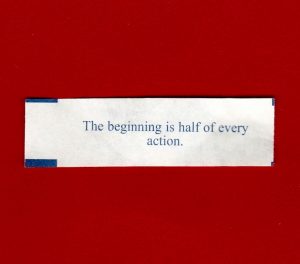 Every morning I start my day by pouring a cup of coffee, sitting in the living room with my husband, and watching the morning news. With the exception of the TV, it is a very peaceful moment of my day. I am instantly joined by my cat, Lexus, who must sit on my lap as if she hasn’t been next to me in bed the whole night previous.I always joke that if I don’t have my two cups of coffee in the morning, I am meaner than Leroy Brown and the junkyard dog he’s compared to in the song. I’m really not that bad, but it’s imperative that I am well supplied with coffee in the morning.

“The best way to fight doubt is to start thinking positively. This will give you the encouragement to take that first step.”
The beginning of the day can be difficult for many. In fact, the beginning of anything can be difficult. That is where our fortune comes in—the beginning is half of every action. This saying possibly originated from Pythagoras, the Greek father of mathematics and discoverer of the Pythagorean theorem. You may have used his formula when you needed to decide what size TV will fit in your room. Yay Math!

According to author Dwight Edwards Marvin, our fortune is a variation of the phrase, “Well begun is half done” and there are many other variations from other cultures but all “can be traced to Hesiod, who declared that ‘The beginning is half of the whole.’” No matter where it came from, the idea that “starting is half the battle,” is crucial to understand if you want to succeed in any venture. Starting is difficult, but once you get going, it is easy to gain momentum.

Let’s look at it from a physics point of view. Newton’s First Law of Motion—the law of inertia—states, an object at rest will remain at rest, or if in motion, remains in motion at the same speed unless acted on by an unbalanced force. Go Physics! 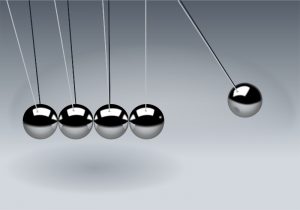 This means that there is a natural tendency of objects to keep on doing what they’re doing. All objects resist changes in their state of motion. In the absence of an unbalanced force, an object at rest will maintain at rest. If you just sit there, you aren’t going to get too far. Are you a couch potato? Prepare to remain a couch potato. Are you a go-getter? Prepare to move mountains. If you want to go from couch potato to go-getter, you are going to need a little external force.

What is the external force that changes your state of motion when you are at rest? What impetus do you require to charge into battle? The word impetus is derived from the Latin word impetere—to assail or attack. In a war, the impetus may be the inspirational speech of a leader. It might encourage you to mount up and head out. Your heart is pounding and you may very well die, but you say to yourself, “I will do this for my country.” 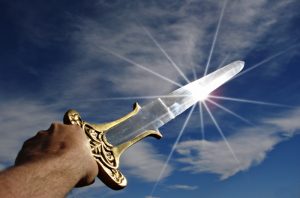 Of course, not all of us are fighters, but that doesn’t mean we have an easier time getting started. You might put off studying for a test even though you know that it will help you do well.  You need to start by simply sitting down and opening up the book. Once open, a whole world of knowledge is at your fingertips. It may seem like hard work. Maybe a part of you doesn’t think you can do it. That book cover, though only mere ounces, can become the heaviest thing to lift when you let doubt fill your mind.

The best way to fight doubt is to start thinking positively. This will give you the encouragement to take that first step. Take a deep breath, tell yourself that you can get through it. Once you get the ball rolling, you’ll make great strides and feel more confident.

Norman Vincent Peale, Christian minister and author of The Power of Positive Thinking, said, “Action is a great restorer and builder of confidence. Inaction is not only the result, but the cause, of fear. Perhaps the action you take will be successful; perhaps different action or adjustments will have to follow. But any action is better than no action at all.” You want to be that object in motion. Your impetus can be your own positive thinking, which once you start, gives you momentum.

Action is a great restorer and builder of confidence.Norman Vincent Peale

Getting started can be daunting, but you can do it with a little confidence. The train engine in The Little Engine That Could told himself that he could do it. He thought he could and built up some steam. Soon he was rolling up those tracks and over the hill.

Perhaps Aristotle was on to something when he said, “The beginning seems to be more than half of the whole.” Was he someone that had an unusually difficult time starting things? We may never know, but he must have figured out how to quell his doubts, or he wouldn’t be well-known.

So whether you’re going off to war, needing to study, or just trying to get out of bed in the morning, remember that no change occurs to those of inaction. Get started and you will be half way to success.