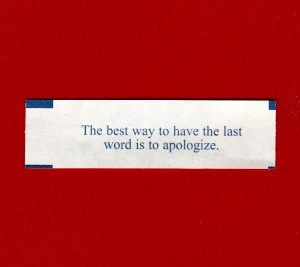 Have you ever been in a conversation—or argument—with someone, and they have to have the last word? If you are anything like me, you probably get irritated. I have this problem with my teenage daughter every once in a while, and I have to remind her that it is inappropriate.

In debating circles, it is advantageous to have the opening statement and get in the last remark, but having the last word does not mean you win the argument. The last word is the last message left lingering on the minds of both parties. It should leave both parties intrigued, but fulfilled.

When I sit down and write, I put a lot of thought into what I say. I research my position—if I have one, I try to say things amicably, and I usually leave topics open for discussion. I do this whether I write a post, message on social media, or write endings in my books—don’t you just love cliffhangers.

Unfortunately, many don’t put thought into what they say. The heat of the moment takes over their common sense and courtesy, and in the end, they vie for the ultimate comeback. Movies and TV shows portray this scenario all of the time. You have some couple arguing and the offended partner delivers the perfect retort before making a dramatic exit. The other partner is left wounded and at fault, sometimes unjustly.

The people that feel compelled to have the last word in arguments are usually insecure, competitive, or hardheaded. They may lack confidence in themselves or in their own intellect and drive their point home at all costs.

Dr. Stephen R. Covey wrote in his best-selling book, The Seven Habits of Highly Effective People, “Most people do not listen with the intent to understand; they listen with the intent to reply.” A healthy relationship doesn’t look like this. A healthy relationship has understanding and compassion. The relationships that last have good communication where the speaker focuses on a single point and the listener concentrates on sharing their partner’s perspective while attempting to discover new insights about him or her. This active listening is a method used for improving communication in couples therapy.

Having the last word can be your undoing. In Greek mythology, the goddess Hera cursed the nymph Echo for consorting with her husband Zeus. Hera made the talkative nymph only able to echo the last words spoken by someone else.

The poet Ovid wrote of Echo’s unrequited love for Narcissus. She fell in love with him but was unable to express her feelings because of the curse. Narcissus was lost in the woods and called for help, the nymph answered in repeat. He called out again, for whoever was speaking, “We must come together!” Echo repeated the words and ran to him. When he finally saw Echo, Narcissus shunned her because she appalled him. Despite her rejection, Echo’s love for Narcissus grew, and she watched her beloved waste away while admiring his own reflection.

Sometimes having the last words might mean they are your very last words. Many regret not saying how they feel before a friend or family member passes away. Their last conversation ended on a bad note and they don’t get a chance to fix the situation. Now they are left to carry that guilt long after.

If you feel like you need to end an argument, consider other options than a dramatic last word. Choose words that help rather than hurt. Think positively rather than negatively. Ask questions and listen to the answers. Most importantly, let go of the need to feel powerful over the other person.

Today’s fortune mentions apologizing as the best approach to having the last word. In arguments, I tend to agree that saying, “I’m sorry,” can turn a dispute in a positive direction. There is also another amicable way to have the last word, say, “I forgive you.” Forgiveness is at the heart of compassion. It shows you understand the other’s transgressions and are ready to let go of any resentment or insecurity and move on. An interesting aspect of forgiving is it doesn’t require the initial apology. Forgiveness can be the opening statement and your final remark. It might not help win a debate, but it will help us all with compassion and prevent us from saying something we regret.

These are my thoughts on our fortune cookie prose. I’m comfortable with not having the last word, so please feel free to comment.