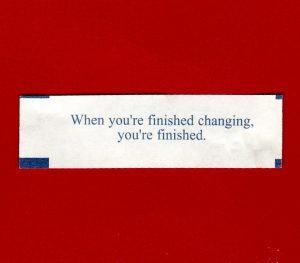 Change is inevitable. In order to stop change one must stop time itself, and I doubt anyone has that ability. From the whispering of the wind to the shifting of the rock, change will occur and we must accept that. The problem is that change can be difficult and therefore, difficult to accept. As a mother of two teens, I have seen more changes than I would like to admit, and until time stops, I’ll continue to exercise and use moisturizer.

Today’s fortune is a quote by Benjamin Franklin. As a man from many diverse fields, politician, scientist, inventor, author, entrepreneur, and musician, he understood the inevitability of change. He made changes in science and political policy, and was able to change the minds of people through his diplomacy, advertising, and satirical writings. Franklin drew on his knowledge to guide him in his inventions. He was a man of change and built many devices designed to help improve or solve everyday problems. Bifocals, the odometer, and improving street lamps, to name a few, show how these changes can be good. Benjamin Franklin even put a new spin on playing music with glasses by inventing the armonica. Nesting different sized glasses on an iron rod, and turned by a foot peddle mechanism, he could play the ethereal sounds much as one played a piano. The haunting sound propelled the instrument’s allure and Mozart even wrote two pieces for the armonica, including “Adagio and Rondo 617.”

Franklin also sought to change himself, for the better. He was devoted to self-improvement. He had less than two years of formal education, but that didn’t stop him from learning. He was an avid reader and poured over writings of others to improve his mind, even though he didn’t have very much money for the books. As an early proponent of physical fitness, he taught himself to swim, and is the only founding father in the Swimming Hall of Fame. To continue on improving his health, he changed his diet and gave up meat. He believed this vegetarian diet was healthier than a diet filled with meat. In addition, since meat was much more expensive, by becoming a vegetarian, Franklin could save money to spend on, what else, more books. At the age of 20, he even decided to change the direction of his life to work towards “moral perfection.” He developed and followed 13 virtues to improve his character.

I can only imagine that he used those same virtues when he helped, as a part of the five-man committee, to draft the Declaration of Independence. This document not only changed the world, but also went through many changes itself. After Thomas Jefferson wrote his first draft, the other members of the Declaration committee and the Continental Congress made 86 changes, including shortening the length by more than a quarter.

When the proceedings of the Constitutional Convention ended, many eager citizens waited outside to learn what happened in the secret meetings. One woman asked Benjamin Franklin, “Well, Doctor, what have we got, a republic or a monarchy?” Without hesitation, he responded, “A republic, if you can keep it.” The changes for our country would be difficult, but if we worked hard, we would succeed. Those changes would eventually result in our country’s independence.

Even if changes are difficult, like getting older or switching to a new school, we need to accept them. When we try to stay the same, and fight evolution, we will eventually falter. If you think you don’t have to change anymore, you’re finished. This holds true for relationships, education, business, and life. We constantly have to modify how we see the world and how we act in it. Our world is aqueous, an ever changing solution of life and ideas. We need to go with the flow. You can still have a solid foundation of virtues to anchor on, but you also need to let out enough rope to carry you on the changing tides.