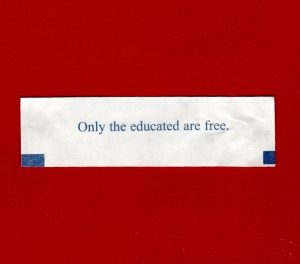 When I was a little girl, my parents bought an encyclopedia set for our home. If you are wondering what that is, it’s a set of books with information on many subjects arranged in alphabetical order. Usually you see them in libraries and it’s what we used before they invented the Internet. The set of hardbound books was expensive and I’m sure it set my parents back some. We received them a couple at a time, and I looked forward to getting the next set of information, bound in a brown cover with fancy gold lettering on the spine.

Back then, having an encyclopedia gave you a special feeling of power—you had a plethora of information right at your fingertips. When the Internet was born, we gave that same power to the next generation. Knowledge is power—the power to set you free.

If you’re in school, you might think that it’s preventing you from having any fun. Studying for tests and finishing homework can take up your free time, but every bit of knowledge you soak up, makes you more capable to do things on your own. Just think about what it would be like if you could not read. Books, magazines, even signs, would look foreign to you. You would have to depend on someone else to tell you what it said, and hope that what they said was true.

Knowledge is not only important in getting you prepared for the real world, it’s important for the rest of your life. You will need it to maintain your finances, schedule your activities, and aid you in making decisions, like voting.

When the colonists settled in America, they wanted to break from Britain and form their own country. Consider the freedom they attained from educating themselves through writings like the Federalist Papers. These eighty-five letters, written to newspapers in the late 1780’s, urged the ratification of the U.S. Constitution. Farmers, smiths, and merchants could gain insight on the new form of government and support it. They would be free.

Whether your education comes from books, teachers, the Internet, or the occasional School House Rock video, it will give you a newfound freedom that you can’t get anywhere else.