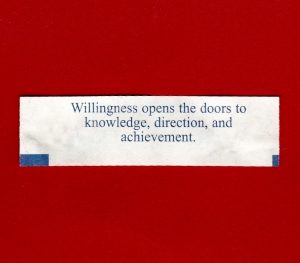 I have noticed a “give me” attitude in society lately. Perhaps it’s been there all along, and I just didn’t see it. I hear people talking out in public, or on social media, about how they want more out of life but act as if it someone should just hand it to them. This isn’t just little children or teens; I hear it from adults too. They want something, but the moment they find out there is work involved in getting it, they give up.

Success in anything, school, work, sports, even quitting a bad habit, takes work. Educator, Marva Collins, said, “Success doesn’t come to you; you go to it.” It’s not given to you, or handed to you on a plate. You have to want it and reach for it. You have to be willing to do the work. This fortune is actually a shortened version of a quote by author Peter McWilliams.

Wanting is easy, but willing is work. Once you’re willing, once you have ambition, you have taken that important first step to success. If you search the Internet for “steps to success,” you’ll find various methods. Some of these are seven steps, some are ten, but all require your willingness as the first step. The second step is taking action. This may be in the form of planning or research, but at least you’re doing something other than sitting on your bum. 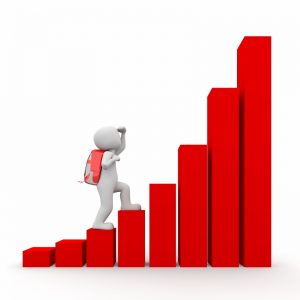 Someone asked me once how I came up with my story ideas. I told them, “That’s easy. I have ideas popping into my head constantly.” It’s actually quite loud in there most of the time, but every once in a while, one calls out above the rest. Right then, it’s just and idea, a thought traveling across my brain. So, I write it down on a post-it-note and stick it to my desk—yellow flaps of paper cover my pretty Ikea hutch and surround my keyboard. If I am away from my desk, I jot down the idea in my phone’s note app. Sooner or later it will join the other paper decorations of my desk.

Why do I do this? If I don’t get the idea out of my head, it will be lost. It will end up as nothing if I don’t do something about it. Just the act of writing it down gives it fruition. At least it’s a start. Later on, if the idea holds promise, I start writing the story. That is when the work comes in, and there is a lot of work involved. I begin researching possible characters and places. I scribe out a general plot and consider a title. I begin writing scenes, and before I know it, I have the beginnings of a book. Is it daunting, sure. Does it take time, heck, yeah! If I am willing to see it succeed, I know that success will happen.

Success is different for each of us. It might be earning a lot of money, conquering a difficult task, or simply changing your habits. I don’t always desire what I write to be on the national best seller list. Sometimes I am happy with just getting it out of my head. Even a little success is a success, but it helps make me a better writer. In all of these cases, you have to want to succeed, but you also have to be willing to change and grow. 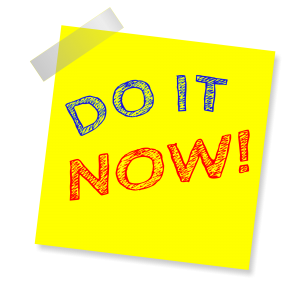