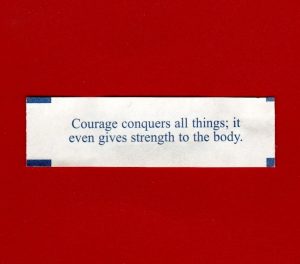 The Roman poet, Ovid, said today’s fortune two millenniums ago, and it made me wonder if he knew more than he knew. I know that sounds a little confusing, but bear with me on this one. The advances in science that we have today were not around in 20 B.C., and I can’t be certain that Ovid had any medical training, but his premise of courage strengthening the body might be more accurate than he expected.

After digging around on the Internet—I love having access to so much information—I found various articles that gave some credence to Ovid’s quote. I will do my best to explain, but you can find all of the links at the bottom of this post if you want to delve further.

Courage is defined as the ability to confront fear, pain, danger, uncertainty or intimidation. It’s also called fortitude. You might confuse this with bravery. Bravery is ignoring fear or lacking fear in situations where others might be afraid. Courage is not the absence of fear; it’s the ability to act in the face of it. Over the years, I’ve personally developed the courage to face big, hair spiders.

Some examples of courageous people are soldiers, police officers, firefighters, and your friendly school bus driver—seriously, school buses are a hostile environment. Anyway, these people know all about the dangers that they will encounter, and yet they proceed, while they stave off the feelings to run in the other direction. Those feelings are strong, and can be difficult to tackle.

The feeling of fear starts from a special part of the brain, the amygdala, an almond-shape set of neurons located deep in the brain’s medial temporal lobe. When we see or hear something that makes us anticipate harm—like a big, hairy spider—a signal travels to the amygdala and causes it to fire a chemical called glutamate, which travels out to two regions of the brain.1

One of those regions is deep in the base of the brain, and its stimulation makes you freeze, or in some cases involuntarily jump. These reactions are so automatic that we have little control over them. The other region is the hypothalamus. Here, glutamate triggers our autonomic nervous system—the part of the brain that controls the fight-or-flight response humans feel when threatened. When this happens, your heart rate and blood pressure rise and pump adrenaline through your body. The adrenaline helps you either run away quickly or fight off whatever threatened you—this includes big, hairy spiders.

OK, so now you’re staring down at this eight-legged monster and wondering what you should do. Well, have a little courage. Oh, you won’t find it in a can or at your local supermarket. No, you have it in you—even now.

It just so happens that your body produces a little chemical that “gives you courage.” The chemical is a hormone called oxytocin, and it has the amazing ability to reduce activation in the amygdala.2 Oxytocin is normally associated with bonding, and it’s called the “love” hormone, because it’s strongly stimulated in intimate situations, like with a loving couple or a breast-feeding mother and her baby, but it’s also produced when you get a compliment, hug someone, or shake their hand.

When you laugh, you also release oxytocin. Think about this, laughing produces the chemical that gives you courage. You can literally laugh in the face of danger, and gain a little courage. I don’t recommend this when facing a charging rhino, but you get the idea. This also may explain why you have a nervous laugh at times. It very well might be your own defense mechanism to deal with your fear. 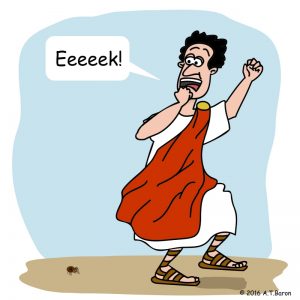 Let’s go back to the spider scenario. You look down and see the big, hairy spider. It’s a terrifying 5 mm in length, and crawling dangerously fast—away from you. You may have already screamed like a little girl, and that’s OK. Remember that you don’t have control over the automatic responses. I’m sure nobody heard you—yeah they did.

Your body now needs oxytocin to stave off the amygdala producing glutamate. All you need is love. Grab the nearest person—probably the one still laughing at you—and give them a hug. If it turns out that you are both scared of spiders, then that hug will give a little courage to you both. You can also think of your favorite comedian to tickle your funny bone, to make yourself laugh.

Now it’s decision time. Do you fight or flee? Courage conquers all things, and it can conquer that creepy crawly too. Scientists have found that taking a courageous step increases activity in another part of the brain, the subgenual anterior cingulate cortex (sgACC).3 When you activate the sgACC, it is actually able to cancel out some of the fear activated by the amygdala.4 Therefore, simply choosing to be courageous can make you courageous. Now you can use that courage to deal with the spider by stepping on it, trapping and releasing it outdoors or the most courageous of all— letting it crawl off out of sight.

I bet you didn’t know you had it in you to do that. You didn’t even need a bottle of Harry Potter’s Felix Felicis, but there’s more. You know that whole “gives the body strength” part of the fortune; oxytocin can give you strength too. The hormone is indispensable for healthy muscle maintenance and repair.5 Some studies have shown that it could potentially “be used to combat muscle tissue wasting caused by aging, disease, and immobility.”6 Yep, courage gives your body strength.

Did Ovid know any of this when he made his statement? I believe the poet had amazing insight, and he’s said many profound quotes, but he probably never realized just how right he was. Two thousand years later, we have shown some proof to his prose.