Yes, today is the day we can revel in our small furry friends.

Now, before I go any further, I want to acknowledge those that don’t like squirrels. I understand that you think of them as vermin. They are bushy-tailed rats that chew holes in your home so they can nest in your attic, or empty your bird feeder of expensive seed. Yes, these animals can be very destructive, but considering what human kind has done to their environment, let’s give them a break for one day. You can go back to your avenging nature tomorrow.

OK, for the rest of us that like squirrels, take some time today to do something squirrel related. I love squirrels, second only to otters. In fact, I even wrote some books about them. A Tale of Two Squirrels is a middle-grade chapter book. The story is about a young squirrel’s adventure through stormy weather and her search for a new home, with the help from some unexpected friends. It gives reader a different perspective of the common yard critter. Prior to that, I wrote Squirrely Over Nuts, a picture book where a young squirrel, with a peanut allergy, has to find something safe to eat.

How can you honor our furry friend on this special day? Well, you could read my books. They are both available on Amazon. If you don’t feel like doing that (though I highly recommend it), you could also try these ideas:

Find some time during the day, mid-morning or late afternoon are optimal, and go to the park or even your own back yard. Sit quietly and look for squirrels in the trees or scampering on the ground. If you don’t see any, don’t worry. At least you got to spend some time outdoors, getting some fresh air. 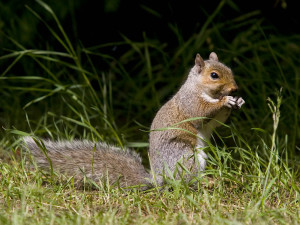 I utilize this time to brainstorm ideas for writing and illustrating. It is surprising how much better your brain functions when not cooped up in a tiny room staring at a computer monitor.

Many people have bird feeders in their yards. These easy-access feeding stations are a welcomed sight to squirrels. Unfortunately, you probably want to save that feed for the birds. Purchase some peanuts from the grocery store, or throw out those older nuts from the holidays. You can then watch them collect and bury them for later. 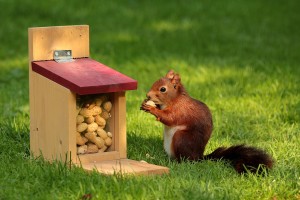 I had a lovely mix from Christmas one year. It had all sorts of nuts in it. The squirrels loved the variety and I enjoyed watching them try to figure out what to do with a Brazil nut.

Wait! Not with a gun, use a camera. You can take photographs or videos of them and post them on Facebook or YouTube. If you planned, you may have had an obstacle course set up for them. These little animal acrobats are very entertaining to observe. 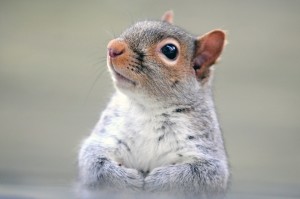 I can’t tell you how many photos I have of squirrels. I needed many for drawing references, but some were just because I thought they were cute.

Did you know that there are more than 200 squirrel species in the world? Every continent can enjoy these bundles of energy; with the notable exception of Australia. They have enough cute critters.

The African pygmy squirrel is only five inches (thirteen centimeters) long from nose to tail, while the Indian giant squirrel is three feet (almost a meter) long. Most of my readers may only be familiar with North American species, but there is some variety there too. 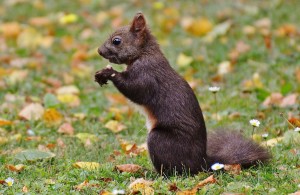 You can observe Tree Squirrels, the type depicted in most cartoons. Found in woodlands and urban areas, these are Grey and Red. Those black ones found in Ontario and Quebec are Grey squirrels but they have a more dominate black color in their fur. You may even be able to see an Albino squirrel but they are very rare. 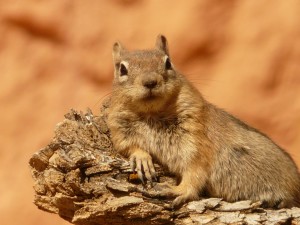 We also have Ground Squirrels that live in evergreen forests of North and Central America. These squirrels run into their burrows formed in the ground when startled, as opposed to up a tree. These are also smaller than their tree cousins are.

If you decide to stay out late, you might be able to catch a glimpse of a Flying Squirrel. Flying squirrels live in deciduous and coniferous forests and woodlands. The southern flying squirrel is found from southeastern Canada into the eastern United States and from Mexico to Honduras. The Northern flying squirrel lives primarily in the northeast, along the west coast, and into Idaho and Montana.

If you really like squirrels and want to help them out, consider having a feeding station just for them. You can also put up nest boxes, so they have a safe and warm place to sleep. 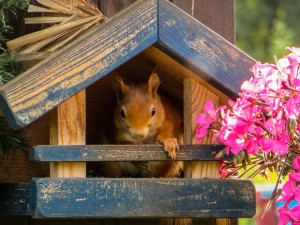 Above all, take some time to enjoy the nature. We are granted an opportunity to see endless species, so don’t waste it. Go Nuts!

Winnie the Pooh Day – Not a Bother Fortune Cookie Friday: Pontification from Po