Fortune Cookie Friday: The End Is Just the Beginning

Whenever I sit down to write a novel, letter, or blog post, I always consider the end. Even as I write these words, I am formulating the last line. The end is the culmination of the work, and in my opinion, it is the most important part. I am not the only writer that does this, though I would love to feel special (with all of my idiosyncrasies); many well-known authors follow this method. 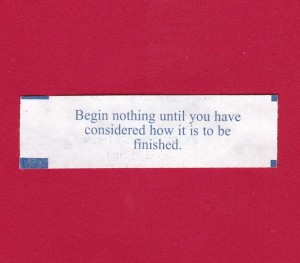 Poe is known for his short stories and poems, like The Raven, but he also wrote The Philosophy of Composition. This essay presents three of Poe’s theories regarding literature, one of which is “Unity of effect.” It states his conviction that an author should write their work of fiction only after they decide how it is to end and which emotional response, or “effect,” they wish to create, commonly known as the “unity of effect.” He had a mastery of mystery, and knowing the end of your story will enable you to lay out all the right clues and foreshadowing.

Yes, the creator of Hogwarts and everything magical had a similar tactic. Rowling started writing about Harry Potter back in 1990, after she came up with the idea while waiting for a train. She didn’t have a pen handy, and was too shy to ask for one, so she sat and pondered the story during the long delay. Later that evening, she started writing Harry Potter and the Philosopher’s Stone. According to a BBC interview, around that same time, she wrote the last chapter of the seventh and final Harry Potter book, Harry Potter and the Deathly Hallows. “Mischief managed.”

This author’s best-selling novel, Gone with the Wind, was essentially written backwards. Mitchell had already known how Rhett Butler and Scarlett O’Hara would turn out. She wrote out all of the final details of their romance and then filled in the rest of it. Margaret Mitchell submitted the Gone with the Wind manuscript to Harold Latham of Macmillan, back in April of 1935. Later, in a letter to Latham, she responded to criticism of the work and the ending by mentioning she had an “unfortunate habit of writing things backwards, last chapter first and first last,” and stated, “My own intention when I wrote it was to leave the ending open to the reader.” For readers not familiar with the book, you will have to read the 1472 pages to find out what happens. 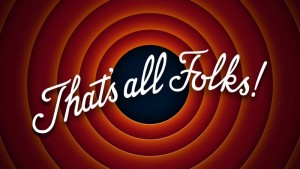 In case you were wondering how I was going to end my post, I already knew that back at the beginning. I recalled a quote by T. S. Eliot just after reading this fortune, “What we call the beginning is often the end. And to make an end is to make a beginning. The end is where we start from.” And so, I will end it here, until next time. Cheers!