There have been many days of hot, dry weather in the Big Woods. The river is considerably lower than previous years, and Mr. Otter is worried about the supply of food. The only ones who were enjoying this mild drought were my boys.

For the past two weeks, they have disappeared into the woods to play. None of the neighbors complained about them, and they always came home before dark, so I have not been worried. Well, that was until yesterday.

Bradley was chatting with Benjamin about the object they found recently. I thought they returned it, but realized that there was more to the story.

“He was crawling through the grass on all fours, just like us,” Bradley said. “He passed it four times!”

Benjamin leaned in closer, “What happened next?”

“Well,” Bradley continued. “He plopped down in the grass, next to some bag, and pulled out a wooden thing. I don’t know what it was, but it had some shiny parts on it like the thingamabob he was looking for.” 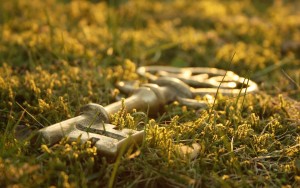 I realized that the “thingamabob” was that very object I told them to return.

“He lay there for a bit and then got up and left. He never found it.” Bradley squirmed and smiled, “Let’s go back and get it.”

I could not hold my tongue any longer, and my anger was building. I strode up to them and grabbed them each by an ear. “Boys, you have a lot of explaining to do, and where is your brother?”

They looked at me with wide eyes and then at each other.

“I’m waiting,” I said, and lifted their ears a little higher. Both of them were on their tiptoes, trying to reduce the pain.

“Bobby is playing up the hill,” Benjamin began. “He doesn’t know anything about this.” Bradley nodded in and agreement.

“I was quite clear in my orders,” I said. “You were to return that object, and stay away from the humans.” I squeezed my fingers on their ears to make my point.

“No! You didn’t think; that’s the problem.” I released their ears and stood with my hands on my hips. They both rubbed the ears and sulked. My boys are usually well behaved and I rarely have to punish them. That was why I hated what came next.

“Both of you are confined to the den. You are not to leave until I say so. If you ever try to get near humans again, your father and I will give you such a nip!” I took a deep breath and glared at them. “Now, go to your beds!”

I watched them crawl to their beds and stepped out of the den to calm down. As the boys said, Bobby was playing on the hill with Filbert, Effie’s son. They scampered around kicking a pinecone back and forth. Occasionally, Filbert would try to eat some of it.

I wish all my boys would partake in innocent play. I hope Benjamin and Bradley put an end to their misbehavior, and I never have to worry about the thingamabob again.