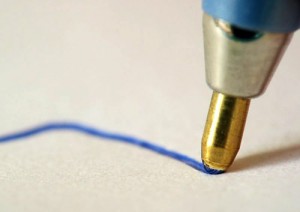 In this day of age, our technology fits in the palms of our hands. We look at the newest released iPhone and marvel at its size compared to the first mobile telephones in the 1940’s. [1] The computer components alone are almost microscopic compared to the room-sized CPU’s used in the past. These items have become commonplace; so will we forget about the leaps in technology and design? Probably.

Today commemorates the day in 1943 that two inventors, brothers Ladislas and Georg Biro, became the owners of US Patent 2,390,636 – better known as the ballpoint pen. This seemingly simple item, a pen that dispenses ink over a metal ball at its point, was conceived and developed as a cleaner and more reliable alternative to quill and fountain pens; and has not only changed the way we write, but influenced graphic art and design.

Although John J. Loud was issued the first patent for this invention on October 30, 1888, his design still leaked and caused smearing on paper. [2] In his defense, his design was meant to write on leather, not paper. The Biro brothers improved on this design and commercialized it. Not long after, Baron Marcel Bich, finally solved the leakage problem and began manufacturing Bic pens in Paris, Ooh-la-la.

Today we have an almost endless supply of these little wonders even some that write in zero gravity. We use these writing implements to sign checks, fill in bubbles on ballots, and give beautiful examples as gifts; there are even collectors of ballpoint pens. They are probably the most unintentionally stolen object around. Honestly, how many times have you walked off with a ballpoint pen that was not yours?

So instead of posting that comment about the cat video on Facebook, or texting your friend about those strappy heals that you must own, why not sit down and write a letter. Grab some paper, that flowery correspondence stuff your Aunt Gertrude gave you for Christmas six years ago, and pull a name from your contact list. Dig into your desk drawer or the dark depths of your purse and whip out that ballpoint pen. Let your thoughts flow like the ink from the cartridge, and write in complete sentences.

Do you feel the power of decades of development? Probably not, but with every stroke, you give a little glimpse of your soul to the reader. Novelist and playwright Edward Bulwer-Lytton first coined the phrase in his play, Richelieu; Or the Conspiracy, “The pen is mightier than the sword,” so take a stab at it. [3]