This week’s fortune had me thinking about the power of a single person’s belief. There have been many wars started over various beliefs. That belief does not have to be a religious one, but the history books are full of examples of religious turmoil. Sometimes the belief is simply one person thinking they are more deserving of some land than another, or that a whole race is undeserving to exist. 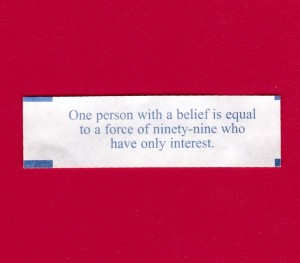 But some great movements in history were the cause of a simple belief, like freedom. Then I started thinking about that power in the mind of a four-year old, who believes in Santa Clause. The joy that shines from an eager child, the night before Christmas, as they set out a plate of cookies and a glass of milk. I think about how so many parents play along, even though they don’t believe, just to please their child.

On top of that, there are the countless stories of people recovering from incurable diseases or conditions by their belief in God, and the power of a prayer. If one person with a belief can be that powerful, and a whole group of people with a belief can move battle lines, what if everyone in the world shared the same belief? Maybe if everyone in the world really believed that we could have world peace, it might just happen.