I was working on one of my books the other day, rewriting a section that needed “tweaking”. I started to think about how most of my work is fiction, but this particular book was going to be more of a self-help book for kids. My thoughts began to wander, which they have a habit of doing often. I wondered where my books would be located in a public library. I love going to libraries; they all have a unique sense of character. Some are small and quaint, with the necessary supplies for information like dictionaries, encyclopedias, and limited stacks of what they have to offer their local citizenry. Others are vast and expansive, with rows upon rows of volumes that must take weeks to organize. I spent many an hour in libraries growing up and even was a member of my high school library club. Ok, so I am a bit of a geek. Then it should not surprise you that this led me to think about the Dewey Decimal System. 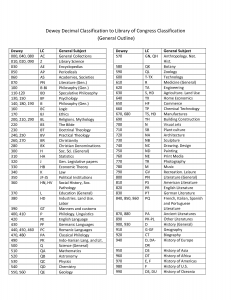 Now you are probably wondering, “doesn’t she have better things to do?” Yes, I do; but I am a writer and illustrator and therefore I am apt to daydream…I mean, cogitate the minute intricacies of life. This is why I have a sink full of dishes and a load of laundry half folded on my living room sofa, and here I am sitting at my computer, blogging.

The Dewey Decimal System or Dewey Decimal Classification system (DDC) is a numerical method of categorizing books in a library by subject matter. Created by Melvil Dewey in 1876, it uses groupings of ten for organizing. There are ten main classes, broken down into ten divisions, each of which has ten sections [1]. A book on the comparison of Democracy vs Socialism for example, is found under the call number 321[2]; 300 for Social Sciences, 20 for Political Science, and 1 for Systems of Governments & States. This three-digit number is followed by a decimal point, which may be followed by more numbers to more specifically categorize the book. A second line of the call number contains the first few letters of the author’s name. The system uses this to alphabetize books with the same numerical classification. Now don’t you feel better knowing that?

Most of my books would be located under the 800, or Literature section. However, many libraries organize these books in a separate section under Fiction, and alphabetize them by author. This makes it easier for the patron to find popular novels and to keep the 800 section of the system from becoming massive.

I have found that this one section seems to take up a large section of many suburban libraries. It seems with the advent of the internet, referencing material is better performed sitting at your computer than rummaging through an out of date encyclopedia set. Unfortunately, my fear is that soon people will not need the physical bound book. EBooks are generally less expensive and take up virtual shelf space as opposed to lining your den wall with volumes of your favorite works. Of course, that is a subject for a separate post. Now that I think about it, I need to add dusting to my list of chores to finish. Maybe I should check out a book on keeping things tidy. In case you were wondering, that would be under the call number 648 Housekeeping.